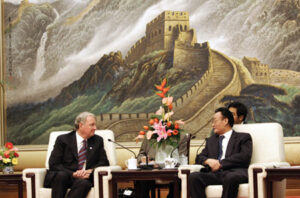 I don’t think that anyone can really argue the state of our relationship with the United States. Under the current regime, as well as the former one of Mr. Chretien, our relations with our American cousins have gone consistently in one direction; south. By south I do not mean the heading on a map, but a decisive cooling of our friendship.

Our government has not only openly criticized Washington policy on a regular basis, but it has also fired a few very personal and deliberate shots at President Bush himself.

While it is good that our leadership stand firm when we are right, if that is what the rulings say, it is quite another to do it for political gain on the domestic and international stage. As with all things political, there are right ways of doing things, and there are wrong ways. Mr. Martin, I believe, is going about things the wrong way, and his threatening stance has the capacity to do Canadian workers and companies a great disservice.

Is it wise to antagonize our biggest trading partner? I don’t think so. Canada has always stood side by side with the Americans, at least since our first years and the struggles to define our earliest borders with them, way back when we were simply British subjects. The current Liberal government is waging our future on a rising China and India. While it would do Canada good to embark on new trade with new partners, cutting the legs off of our current one is not only bad business, but it is wrong.

If the current trade deficit continues within the United States, we may, for the first time in our lives and in recent history, see the balance of power shift from us to them, them being the socialist countries of the world as I have stated in previous columns. Money, after all, equals power. Canadian foreign policy not only recognizes this, but is placing all of our chips on it.

I for one am not keen to see the Canadian people climb into bed politically or economically with the regime that rules China with an iron fist. Our leader, Prime Minister Paul Martin, constantly evokes phrases such as Canadian values, human rights, and equality. China does not embrace any of these qualities. Is Mr. Martin now showing us his own hidden agenda? Are we to cozy up to a nation that does not hold dear any of the qualities that he espouses? Perhaps Paul Martin’s vision of Canada in the future simply resembles China more than it resembles the United States.

On October 7, 2005, Mr. Martin said, ‘For us, there is no doubt, China and India represent an exciting new opportunity that we intend to take advantage of.”

December 13, 2005 in Surrey, BC, Mr. Martin said it is time for a “new multilateralism” that takes into account the rise of economic giants like India and China.

On November 20, 2005, Prime Minister Paul Martin said rich countries like Canada and the United States should help pay to compensate farmers in poor countries who are being asked to kill their animals if they are infected with avian flu. My secret decoder ring says this means that we should give China some taxpayer money.

The following quote was found last month on the strangest of websites. It was on no other than the anti-American Al-Jazeera. “No one wants a trade war, but we have to have more markets and secure markets. That’s why we’re reaching out to China and India.” That comment was aimed at no other than the United States. I guess they had time to print these comments by the Canadian Prime Minister between publicized beheading videos.

Add to that the fact that we are now signing contracts with the Chinese to deliver our oil, and you have the salt that is rubbed into the wound.

So now that we know where the Prime Minister would take us, are we wanting to go there? Will we forsake the relationship with America that we have had since our conception, through two World Wars, and the Korean War? There is Nato, Norad, and Nafta. We share a common heritage, language, and at one time, morality. Our nations were both founded by people of faith and they both have similar rights and laws.

While the anti-American showmanship may be scoring Paul Martin political points with Canada’s Liberal voters, it may be destroying the friendship that most Canadians used to hold dear.

That is sad. For all the rhetoric and posturing that comes with politics, the U.S. is a great nation, and a great friend. If there were to be a great disaster in our midst, I sure as hay wouldn’t hold my breath waiting for the Chinese to arrive, but I know that my American neighbours would be at my door before I picked up the phone to call them. How do I know this? Because they even do it for their enemies.