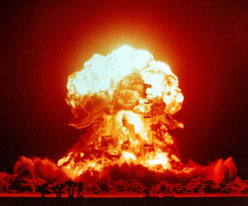 With the War in Iraq now more than 1000 days old, I often get drawn into the debate over whether or not Canada should have joined her American cousin in the Iraq offensive. I must point out that these views are my own and in no way reflect the views of the Conservative Party.

Those who are against Canada’s participation in the War in Iraq often say that they are strong proponents of the United Nations. Myself, I would like to see it disappear, but that is another story. To be against the War in Iraq and at the same time be a supporter of the United Nations is totally inconsistent, and has a huge gulf in its logic. While the mainstream press is quick to point out that weapons of mass destruction (WMD) were never found in Iraq, that is not the point, not at all.

At the time of the beginning of the Iraq War, there was an almost universal consensus among member nations at the United Nations that Saddam was creating or hiding WMD. That is the only relevant point that is needed at this time. There was a consensus that Saddam was in contravention of Resolution 1441, allowing for the unobstructed and unfettered access of United Nations inspection teams. It is that resolution which Saddam was thumbing his nose at, by playing possum with inspection teams. In fact, between 1991 and 2003, Saddam violated 17 U.N. Security Council resolutions. Why is this enough for me to warrant aggression against Iraq? Read on.

When WWI ended, the terms of peace and of Germany’s surrender were agreed to at Versailles, and were very strict. Germany agreed to the terms which were to stay in effect until such a time that she was admitted into the League of Nations, when they would then be reconsidered and/or modified.

As aggressor nation in WWI, Germany was handed heavy punitive measures which were mainly to prevent her from ever becoming an aggressor nation again. To simplify the terms, Germany was to have no more than 100,000 members of its combined armed forces, was to have no air force, and only a skeleton navy, which could include zero submarines. It also could not militarize into the Rhineland, a buffer zone between Germany and France.

In 1935, Adolf Hitler began to re-arm Germany, a direct violation of the Versailles Treaty. He then re-instituted the draft to rebuild Germany’s forces, another direct violation. That same year, Britain concluded a naval pact with Germany, which prompted Germany to build a battle fleet, including submarines. This was another direct violation of the Versailles Treaty. With Britain being one of the two guarantors of Germany’s compliance with the Treaty, France being the second one, Germany was able to thumb its nose at the League of Nations. On March 7, 1936, Germany marched a small contingent of soldiers into the Rhineland, increasing the number of soldiers within days. This was also a clear, direct, and calculated breach of the Versailles Treaty, and one which was known as the Rhineland Crisis.

Looking back, it is glaringly obvious that had the world had the conviction and determination to enforce the treaty as men like Winston Churchill pleaded, the world would have been much safer. Not only would the League of Nations survived, WWII in its entirety would have been circumvented. Millions would still be with us.

Germany contravened almost the entire Versailles Treaty when looking at the Articles that dealt with troop strength, naval size, air force capabilities, and submarine capabilities. Many thought Hitler harmless, as he only ruled a small nation, one that was still recovering from its losses in the Great War.

The point of this is that many around me today stand up and espouse the benefits of a world body that can enforce its will on the unruly tyrants that creep into our existence every once in awhile. After the devastation and destruction that was WWII, the world’s peoples cried in harmony, “Never Again.” Then along comes another despot named Saddam Hussein. Saddam invaded Kuwait, exterminated tens of thousands of Kurds in northern Iraq using chemical weapons, ruthlessly controlled the majority Shiite population in his own country, and attempted to obtain weapons of mass destruction.

After the Gulf War, Saddam was sanctioned and severe restrictions and conditions were placed on Iraq. Such things happen when you lose wars. They are called terms of surrender, and you don’t get to pick what they are unless you are the victor. The world was the victor. At first Saddam complied, but then grew more and more squirrelly, trying to stymie and circumvent the United Nations’ Security Council at every turn. He was given chance after chance after chance to come into compliance, but he continually made a conscious choice not to.

Had the world simply allowed this tyrant to continue to play loose with the terms of his surrender and those that were leveled against Iraq, they would have made the same mistake that they had made when Hitler came to town. Personally, I am thankful for the leaders who recognized the imminent threat that Saddam represented. Not as a tyrant with WMD, but as a tyrant that doesn’t subscribe to “Never Again”. While there have been shortcomings in this war, I believe that it was justified. Not only justified, but necessary.

Unless the world wants to revisit World War II, it had better start taking lunatics seriously.