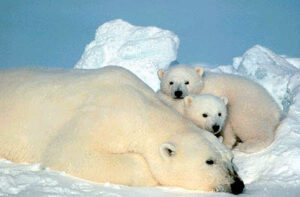 When science is used to achieve a political goal, it is no longer science. It may resemble it, but that is where the relationship ends. In a dramatic story being published across the globe this week, we are told that polar bears are eating each other because of global warming and that this behaviour is unprecedented. Historical evidence and past studies show this to be an outright lie.

With so many people finally being convinced that we are on some kind of ecological precipice teetering towards catastrophe, one would truly have to stand back and wonder why some are still using pseudo-science to promote their cause. Is it a quest for personal recognition, an attempt to simply get one’s thesis published, or is the goal to manipulate our behaviour?

For diehard environmentalists, of which I know a few, reading this story will simply reaffirm your belief that some of us simply don’t get it and that we will not believe that global warming is upon us until it is too late. It is those of you with such a position that I challenge to put aside my personal opinions on global warming and consider the evidence. Not my views, but scientific fact.

The story being propagated this week cites a study done by Canadian and American scientists north of Alaska. The study centres around the fact that a female bear was eaten by males shortly after giving birth and that several young cubs have also been found. The authors decry the reason as melting ice sheets and a shortage of food due to global warming.

Statements by the study’s principal author, Steven Amstrup, are incredible and give the reader the impression that something entirely new is taking place. In a story being run by the Associated Press, one of the major providers of data to Canadian and American news outlets, Mr. Amstrup states that “During 24 years of research on polar bears in the southern Beaufort Sea region of northern Alaska and 34 years in northwestern Canada, we have not seen other incidents of polar bears stalking, killing, and eating other polar bears.”

Remember now, this is a scientist who is being quoted for international news agencies and whose comments will be read around the globe.

On another front, The Center for Biological Diversity in California petitioned the federal government in February of last year to list polar bears as threatened under the federal Endangered Species Act. The lead author of that petition, Kassie Siegal, responded to the study’s results by saying “It’s very important new information. It shows in a really graphic way how severe the problem of global warming is for polar bears.”

Should the Center for Biological Diversity not know that cannibalism among polar bears has been witnessed for generations? Yes, it should. Perhaps they have simply chosen to overlook that fact in the name of saving the planet.

Let’s look at this ‘groundbreaking news’ from some other sources.

The National Wildlife Federation, in their Feb/March 2006 online edition ran a story by David Brian Butvill entitled “Eating Among Friends”. In the story, he states that cannibalism is fairly common in many species in the animal world, and lists the polar bear as one of those species which practices the same. In the article, in which he has feedback from several biologists, it is stated that “polar bears throughout the Arctic actively hunt and consume cubs and injured adults.” Note the word ‘actively’.

In a study published by the University of Calgary in 2001 and written by well known polar bear researchers Markus Dyck and Kim Daley, it was revealed that two male polar bear were observed, over a four day period, consuming a yearling polar bear at Churchill, Manitoba. In its very first sentence, the study opens by naming four other documented studies in which cannibalism has been observed and they go back as far as 1985, or 20 years prior to the study now being run by most media outlets.

On PubMed, an online chronicle of the National Library of Medicine and the National Institutes of Health, a study dealing with Trichinella infections in marine mammals states that “Cannibalism is probably the most important factor in maintaining a Trichinella cycle in polar bears.” The study was done by Forbes., L.B. in December, 2000

The website for Polar Bears International states that “Polar bears will eat the flesh of their own kind, and often a bear that kills another will eat it.”

Back to the newly released study that is the basis for this article. In the Globe and Mail national online edition today, their article which discusses the subject starts off with the following three paragraphs:

Two polar bears have starved to death and two others were found dead this year in the region where scientists previously discovered unprecedented cannibalism within the population.

Scientists were stunned to discover that two mother polar bears had been stalked, killed and eaten near their Beaufort Sea dens, and that much larger male bears cannibalized a young male during the spring of 2004.

Now, four more dead polar bears have been found in the Alaskan and Canadian regions of the Beaufort Sea, and researchers are getting worried

Reading those paragraphs would lead the reader to believe that there is an epidemic happening. It is, in fact, talking about the same four bears in both the first and the third paragraphs. The second paragraph does not refer to the latest study, but to an earlier one. The first paragraph should have been the header for the story, but was presented as the first paragraph, confusing the total amount of bears involved. As well, it states that ‘unprecedented’ cannibalism was observed.

Dr. Amstrup states in the article that he recognizes that cannibalism exists but was ‘shocked’ to see a female stalked and ambushed by males hunting for food. “These are very rare events. The fact that we observed three in a row is very profound,” Dr. Amstrup said. We have gone from two to three. The article then follows up with the following: The causes of death are being investigated, but Dr. Amstrup said the incidents were unprecedented.

Now which is it? Were the bears stalked and killed by males or weren’t they? If this is certain, then why are the causes of death being investigated?

I am not an expert into the behaviour of polar bears or any other mammal, nor do I profess to be, but the article above clearly shows that there is much that these observers are unsure of. To jump to the conclusion that this is an abnormal pattern or that it is either directly or indirectly related to the theory of global warming is not only poor science, but it is irresponsible.

I, for one, do not believe that there is an approaching environmental apocalypse. With that being said, there are many in the scientific community who are absolutely certain that such a calamity is not only a guaranteed event, but that it is upon us now. If that is the case, and if they feel so strongly about it, then I suggest that they are failing in their responsibility as scientists to convince the rest of us of the fact, and one of the ways that they are failing is by allowing misinformation to be published and called science. That does the very cause that they claim to believe in the greatest disservice possible.