Editor’s Note: Part III in our series on the ethics surrounding the global warming debate deals with the numbers. Why is it that so many different groups have so many different estimates and measurements? Facts shouldn’t have different versions. Also, I don’t dispute that temperatures have risen, I only question the motives of some who are intent on blaming man when the evidence doesn’t always support this belief.

One more thing, a special thank you to Jan in Arizona, who guided me to this link: http://www.geocraft.com/WVFossils/ice_ages.html

The Natural Resources Defense Council is the latest to declare that the Arctic ice is melting. On its website, it is stated that permanent ice cover is shrinking at a rate of 9% per decade. NSIDC and NASA scientists just released a study quoting a rate of 8% a decade.

Last Week, ABC News Online ran a story about the shrinking Arctic ice cover. Its headline proclaimed “Scientists ‘flabbergasted’ at Arctic melting.” In the first few lines we read “scientists say they are recording the lowest extent of polar ice cover for more than 100 years and warn that global warming could be accelerating.” Now it is obvious that the intent here is that global warming is melting the icecaps. However, further into the story, near the bottom I may add, we read “Ms. Stroeve says it is hard to tell whether the melting is due to a natural occurrence, or if can it blamed on increased emissions of greenhouse gases into the atmosphere.” Keywords for this story: “could be”, “hard to tell”, and “if”.

On the Environmental Protection Association’s website, their summary for 2004 states that “The extent of mean snow cover in the Northern Hemisphere was slightly above average overall in 2004…” As well, we are told that “…satellite data also indicate that temperatures in the stratosphere have been below average.”

Last week, Kevin Trenberth, a senior scientist with the National Centre for Atmospheric Research, located in Boulder, Colorado stated that “Global warming, I think, is playing a role in the hurricanes, but a lot of what is going on is natural.” Mr. Trenberth is a member of the UN Intergovernmental Panel on Climate Change.

As of yesterday, we have now seen 18 named tropical storms so far this year in the Caribbean, Atlantic, and Gulf regions, but that is not the record. That distinction belongs to 1933, when there were 21. I wonder what the war cry was in 1933?

On September 29, the New York Times reported “The floating cap of sea ice on the Arctic Ocean shrank this summer to what is probably its smallest size in a century.” Keyword: ‘probably’. A day earlier, CTV reported “The data show that on Sept. 21, 2005, the area covered by ice shrank to 5.32 million square kilometres, the lowest recorded since 1978, when satellite records became available.” Quite the difference, going from a century to 27 years. As reported last month as well, before NASA launched the IceSat satellite for measuring the height of ice on Greenland and other places in the north, scientists were ‘unsure’ as to the volume of ice. Therefore, and claim that the ice has greatly protracted in the last 100 years is simply not a scientifically accurate argument. Ice cover does not always cover the same ground, but moves.

Last year, the California Academy of Science reported the following: “The remains of prehistoric forests complete with stumps and fallen leaves have been found for the first time in the snowfields of Antarctica. Based on measurements of trunk diameter, these extinct Glossopteris trees may have grown up to 80 feet high.” Apparently, global warming was an issue a long time ago, as well.

Looking at some of the charts that have been used, the first is a chart that was issued by the National Center for Atmospheric Research. It shows a steady increase in temperature from 1910 to about 1942, and then a steady decline from 1942 through to 1970. The second chart, issued by the U.S. National Climatic Center in 2001 shows a completely different picture, with the temperatures fluctuating wildly. As well the chart on the left states that the global change in 1940 was around .8 degrees Fahrenheit above average, while the second chart states .4 degrees Fahrenheit. While the charts are neither indicative or important to my point, one has to wonder why there is such a huge difference in two different graphs put out by reputable sources for the same time period. Is there no standardized method being used by all scientific departments when it comes to measuring temperature? The only other explanation is that the average has increased. While this would support global warming is happening, it also underscores how alarmist some evidence can seem, depending on how it is presented. 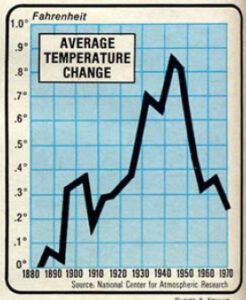 The second chart, drawn in 2001, also clearly indicates an abrupt drop in the rate in which the average temperature was increasing. Why was this fact not heralded in the papers for all to see? By the graphs own indications, levels had dropped to 1990 levels. Was this not news worthy?

Also, since the average normal temperature is compiled using data from a great many years, thus in an attempt to get a better picture, the charts above actually proclaim the opposite to global warming. If the temperature spike from 1910 to 1940 has gone from .9 degrees difference to .35 degrees difference, one must gather from that data that temperatures have been moderating, and not increasing as drastically.

Between 1917 and 1923, Greenland experienced an increase of 7.3°C in their average temperatures. This occurred in only 6 years. Of course, looking at the entire period of the 20th century, the figure is dramatically lower. Changing the time frames arbitrarily can change the picture that results. Taking the worst few years and building a graph to show extreme changes is not neutral, nor is it good science. It is meant to help you draw a conclusion that correlates with that of the one presenting the data. If you were to take the first chart above, and make another with only the data from 1910 to 1940, you could accurately say that if the trend continues, we will shortly be growing oranges in Canada. It would be, however, not true at all.

Science must come clean. There is a wealth of evidence that there is a warming trend underway. There is also a wealth of evidence that states that this is a natural occurrence. To keep postulating that man is the culprit simply is dishonest, and supports an agenda to change the way we live, and the very prosperity that many nations now enjoy. Many in the scientific community have been playing Texas Hold ‘Em with their careers. They have staked everything on the outrageous claims of a few that man is even capable of having a profound impact on a global weather system. It is now too late for them to fold, lest they look foolish. Their only hope now, is to bluff. The problem with that, of course, is that sooner or later, we will all see their hand.