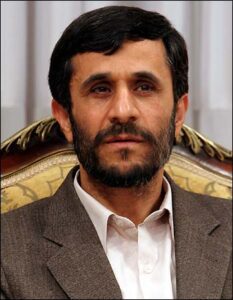 I have often wondered while watching films such as Schindler’s List just how a leader such as Hitler or Mussolini was able to contort the minds of an entire nation into believing that evil was good. It has never ceased to amaze me that one person could convince so many others that something so obviously and fundamentally wrong was actually the right thing.

As I have gotten older, I have come to realize that some of the ingredients that a tyrant needs to build his empire are poverty and a strong propaganda machine as is the case with most state run educational systems.

Iran also has another key ingredient: a large population of youth. A majority of Iran’s population, as much as 70%, is under 30. That pans out to approximately 49 million Iranians under the age of 30.

Throw into the mix a bitter, seething, charismatic leader; and you have the makings of something horrible.

Mahmoud Ahmadinejad is not just another president. He is vocal, active with the youth of his country, and he is a firebrand doomsday preacher. Not the doomsday we hear about in our churches, but the doomsday that he wishes he could direct onto the West, onto you and me and our nation.

Mahmoud can be found at celebrations and protests around his country, and at each one, he exercises the opportunity to incite the muslim crowds into an anti-Semitic frenzy. His favourite speeches involve crushing the arrogant West and pushing Zionist Israel into the sea.

For the most part, young Iranians are well educated, with their literacy rate coming in at 80%, which is higher than India’s and on par with Canada’s at the beginning of the 1980’s. As well, Iranians are now the fourth largest bloggers on the planet, and are very proficient with the internet. When asked off of camera, many Iranians say that they would like to be more like the West, with a free and open society. Words like that, of course, are not as free to speak as those who utter them wish they were.

With Iran on the cusp of possessing nuclear arms, Ahmadinejad will soon have a new weapon with which to rise up the impressionable youth who find themselves attracted to his charms and oratories. Not only will he be able to point it at the West, he will be able to rally the youth of Iran as he claims to ‘usurp the will of the evil Western Empire.’

If this man attains the means with which to build his own bomb, he will have a weapon that will not only give him immense bargaining power, it will also give him immense credibility to the disenchanted among Iranian youth. He will have a following that no one will be able to tear away from him. Perhaps even enough for a coup.

Some may say that I am simply fear mongering, or that I have too much time to think. I don’t think either of those are very accurate. I know that sometimes history is unfolding as we watch, but we don’t realize it. I wonder if the people that watched Hitler, Stalin, and Mussolini at large gatherings ever imagined that they were watching one of humanity’s biggest evils in the flesh? What if one of them had have had the bomb?

While I do not dwell on things this ugly, they no less do cross my mind. It is only by thinking the unthinkable that we can ever hope to prevent it from becoming a reality.