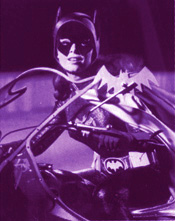 Just over a month ago, I had commented to the guy next to me that I was surprised we haven’t had a gay Superman thrust upon us yet. (Sorry for the poor choice of words.) After all, if Johnny is going to embrace the debauchery that so many are intent on convincing him is normal, then won’t we have to close all of the moral loopholes in our society?

We have eradicated that nasty religious stuff, you know, that nonsense that the greatest societies man has ever known were based on. Now we must convince the young one’s that our sicknesses are healthy and that our absolute abandonment of anything resembling the former ‘normal’ is simply a natural progression of our amazing evolution. Our children are smarter than we give them credit for. They will find any inconsistencies in our tripe, so we must be careful.

DC Comics has just announced that Batgirl will be resurrected. This time, she won’t be just any Batgirl, but a Batgirl that is depraved to represent our society a little more honestly. Yes, it’s true, Batgirl will now be seeking out other women to pleasure herself by. She will be a this time, not a librarian. Or perhaps both. It is not yet clear if she will represent the feminine persona or the masculine side, the one that so many are intent on eradicating in our little boys. Perhaps she will be in the next Pride Parade in Toronto. Heck, DC Comics may be able to have their own float. Perhaps Robin can be fawning off of Batman. Just what happened all those nights in the Bat cave?

Surely not too far behind will be an openly depraved Barbie or some other such atrocity. Perhaps we could have a Divorce Barbie who leaves neanderthal Ken for a warmer, softer Kim doll. You just never know.

I have been raising the alarm for the last 10 years about the agenda and what its ultimate goal was. Apparently setting goals truly is the way to go, as the Sodomite community has almost reached theirs.

While crying out for their right to be dysfunctional and while professing to only want the same legal rights as anyone else, they haven’t been totally truthful. That is not their goal, nor has it ever been. Their goal is simply to normalize their destructive lifestyle choices and to be able to get to Johnny and Joanie when they are at their most impressionable stage of social development. To attain the status that they crave, the Sodomite community must first convince our children that their lifestyle is not only risk neutral, but that it is absolutely a normal thing.

Only 10 years ago, most would have said that gay persons had the right to be treated as anyone else. I agree with that notion. Nobody has the right to cause anyone else harm, physical or otherwise. That would have been the extent of their passions. For most people, that is. Now, most people will tell you that they believe that is normal because of vague evidence that these people may be born that way. In fact, there is plenty of evidence to suggest the opposite.

Simply saying that one is born with a predisposition to any behaviour does not automatically make that behaviour safe, normal, or acceptable. Take for instance the fact that children of smokers are much more likely to become smokers. The triggers have already been placed in the brain by the parents’ actions.

In English, the children were born ‘different’ than the children of non-smokers. They have a genetic disposition to become smokers. Where are all of the advocates for smokers’ rights? After all, is it their fault that they were born that way? We know, of course, that smoking is harmful. It is detrimental to the well being of those who partake in it and leads to extravagant costs to our health system and leads often to certain death. Sounds a lot like another lifestyle choice. It is on those grounds that we are now attempting to condemn that particular lifestyle choice.

There are also those who are hooked on crack and other illicit drugs. They are born that way. There is no call to be compassionate and to feed their addiction out of mercy. Instead, the children are taught to overcome the dependency. The same applies to victims of fetal alcohol syndrome.

Other people are born with some more serious predispositions, such as s, who are drawn towards children with an abnormal, unhealthy, sexual appetite. We frown on their lust now, but what about down the road? Will some sympathetic researcher devote millions of dollars to convince you and I that his behaviour is normal? Will he simply have to point out that the Korean bald assed monkey does the same to convince you that nature intended children to be ?

While on the surface the question seems hilarious, in reality it is not. It is shameful that so many of us have been duped by selective research and by studies that have been undertaken not to find the truth, but to simply support the beliefs of those undertaking them. In just a decade, we have seen the entire concept of normal redefined. While public opinion has always changed, and often for the social good, there has never been such a concerted effort to make something so harmful seem wonderful.

In days of old, Batgirl would have undergone extensive therapy to help her overcome her apparent depravity. There would have been no doubt by anyone of her social shortcomings. Today, she will simply fit in as one more of the new ‘normal’ and our children, who have not been taught the truth, will simply accept it.

Some will ask why I hate s. The truth? I don’t hate anybody, but simply feel that what is being passed out as benign and harmless to our children is anything but. It is the lie that I hate.