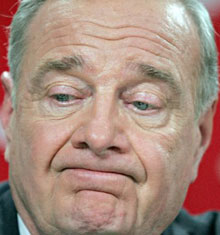 It’s a funny thing, watching the media trying to spin an early election finish. With the CBC running the Mulroney tapes, and the Ontario press corps dredging up ancient Mike Harris issues, I figure it is only a matter of time until some new dirt on Prime Minister Charles Tupper appears. We may find that the two months he spent as prime minister in the late 1800’s was the beginning of the sordid “hidden agenda.”

Whilst there is nothing wrong with doing retrospectives on any Canadian political leader, it seems rather peculiar to see so many ghosts from the past exhumed at the same time on the eve of an election. The funny thing about it is that they are all Conservative politicians. Perhaps after reading today’s column, the media will throw in a little Liberal scandal for good measure so as not to appear too overt in their bias. To be fair, Conservative Joe is definitely biased in favour of conservatism, but he hardly tries to appear neutral. That is where Joe and the mainstream press are candidly different.

Things in our political mill are definitely changing though, and for the better I may add. The polls still show the Liberals are where they were at the beginning of summer. They sink for a bit, then come back; at least that is what the pollers would have you believe. Indeed, we may very well have another minority Liberal government. What then is the source of my optimism? Well, first there is the fact that many people I talk to are fed up. Fed up with the scandals, the out and out lies regarding our country’s finances and the obscene surpluses that keep “appearing”, and the blatant attempts to buy the next election. While this doesn’t guarantee anything, it is a pleasant change from hearing so much negativity against a Conservative Party that, for the most part, people don’t even understand. People are finally starting to give the other parties some serious thought.

I know several diehard Liberals. These people are so brainwashed, they sleep in pajamas with the Liberal logo emblazened on them. Even they are sounding disgruntled. The mood of a nation does not change direction on a dime, but incrementally. It is happening.

Thanks to individual websites such as this one, (and there are many of them), run by people who are simply not hearing their views presented in the mainstream media, those Canadians who educate themselves and keep abreast of all things political are now hearing news come from a different angle. They are being presented with viewpoints that differ from what they are normally being fed. The internet has become the tool of democracy. With that in mind, keep an eye out for sweeping new legislation to come soon to stifle this free expression.

On the frontlines, never before have we seen so much activity. I have never seen a government so desperate to cling to power. The ruling party feels that they are the natural ruling class, knowing much more than you and I do, therefore it is their duty to govern us. The sense of unbelief among them that their license is about to be revoked is almost comical, and would cause me to laugh out loud were I not much more mature than that. We have seen more spending promises by the current federal government than by any other in my lifetime.

Another sign of the desperation is the fear mongering that Mr. Martin and his government have been actively engaging in. We have been told that unimaginable horrors will unfold if and when their mandate is rescinded.

There are signs that things are not very coherent within the Liberal Party of Canada. Perhaps Mr. Martin is simply afraid of those two words that no leader wants to hear whispered. Leadership review.

Whatever else I have missed doesn’t affect my outlook in the least. There is enough positive momentum happening for the conservative movement in this country to be pretty ecstatic. While we may not succeed in going as far as we hope to this time, the tide is definitely changing. It seems that Canadians are finally awakening from their civic slumber.