Media bias. What is it and why does it exist? Quite simply, bias is the reporting of facts or the omission of some of them to cast one party or cause in a certain light, thus manipulating public opinion. That is not Oxford’s definition, but seems to sum up the current events in the press pretty well. Those of you who read the web extensively know what I refer to. Those who don’t are about to receive an introductory course.

Last week, Reuters News agency ran a picture showing the damage to one area of Beirut. With headlines that resembled “Destruction in Beirut” and “Israel Pounds Southern Lebanon”, the pictures carry much weight, but what about the context?

A recent example are the following photographs which Reuters issued to the world just this week. 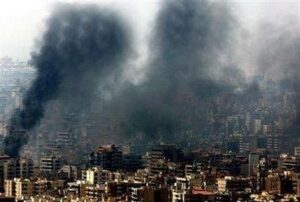 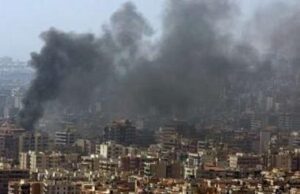 The photo on the left was presented as a factual image, but in fact had been doctored. Buildings had been cloned and the smoke enhanced to make the scene much darker and more foreboding. Even the sky is a different color. Reuters has issued an apology for the ‘error.’

On some Arab websites, there have been pictures of neighbourhoods gutted by attacks. Israeli websites have countered those pictures by showing satellite photos of Beirut. About 2% of the city has been flattened, with the surrounding areas mostly unscathed. We are only shown the most horrific pictures by our media; the one’s that show utter destruction of a small area. The pictures would leave one to believe that Beirut was all but gone, and that is simply untrue.

Earlier, there had been widespread reports of a ‘massacre’ in Qana. Qana is important as that is the location of an errant Israeli air strike 10 years ago wherein over 100 people seeking shelter at a UN compound were accidentally killed. Information has since been forthcoming that casts a huge cloud of doubt over the real events in Qana that day. With the truth taking days to come forth, Hezbollah was able to muster unfounded calls of war crimes and atrocities against Israel by many in the international community, even the United Nations itself.

The media in Canada was quick to sanction the government for calling the Israeli response ‘measured’. After Qana, they attacked our politicians for their stand. Some, including our Prime Minister Harper, have capitulated and abandoned or modified their full support for Israel and have issued statements condemning the occurrence in Qana. Little has been said in their defence since the truth has come to light. Israel was and still is using a ‘measured’ response. The media, however, succeeded in building support for Hezbollah and eroding support for a nation that is battling the same enemy as we are in Afghanistan.

The fact that Hezbollah was firing rockets from the building in Qana were also not reported. There are also new reports that the building shown to the world didn’t collapse for up to 8 hours after the air strike. One photo of a dead child revealed that the child had rigor mortis, therefore the child was not likely killed that day at all. As well, the 57 to 60 dead has now been revised downward to 27. No apologies or crystal clear corrections have been given by most media outlets. Most people still believe Qana happened.

At the outset of hostilities, we saw the Prime Minister of Lebanon tearfully address the world, decrying the destruction of his ‘poor, helpless nation’. Quite moving, in fact. But as the war progresses and new orders come in from Iran and Syria, Prime Minister Fouad Siniora is morphing into something more assertive than he has ever been. Since undergoing parliamentary elections last year, the Lebanese government has been powerless to reign Hezbollah in and unable to place its troops in southern Lebanon as a buffer between Israel and Hezbollah, citing fear of re igniting that country’s civil war. Now, there seems to be no problem in doing this. In fact, Siniora has suggested such a move himself. What has changed? Is Hezbollah now weak enough to contain for the Lebanese army, or it Siniora simply a wolf in sheep’s clothing?

As for his somewhat anti-Syrian stance, that is also dropping. He is becoming adamantly pro-Hezbollah. I would suggest that if you looked closely at him and his nation, he has always been pro-Hezbollah. He simply didn’t want to project that to the rest of the world, or to the United Nations. That would have cost him billions in international monetary aid.

On Monday, Prime Minister Siniora reported that up to 40 people were ‘massacred’ in the village of Houla, once again sparking outrage against Israel. Siniora later recanted his claims and admitted that there had been an error. It turns out only 1 person had died.

We are constantly shown footage of the injured being placed in ambulances. There are some who now claim the same ‘victims’ are being shown in different attacks on different places. While I can offer no proof for or against these assertions, given what has already been uncovered, it wouldn’t surprise me.

We are shown the bodies of children constantly. To be sure, one of the most unsavory of all the facts of war are the deaths of innocents, especially children. I really hate to go here, but somebody has to. I have to ask a horrible question, but it really isn’t any fault of my own. You see, Muslim terrorists love to use whatever means they can to kill the ‘infidels’. They will even use their own children. How many of the dead women and children that we are shown are enemy combatants? Think I digress? Check out the website on the other end of this link. On that site is plenty of footage of Arab television. At the top right, you will see a link entitled “Inciting Children.” Follow that link to have your eyes opened real wide.

The link will take you to Memri.com , the official site of the Middle East Media Research Institute. It contains volume after volume of media from the Middle East calling for the spilling of Jewish blood as well as ours. You will see leaders calling for their people to sacrifice themselves in jihad. You will even see shows which encourage (to use a word other than brainwash) children to for their faith. One host tells the little children that every good Muslim will gladly give his life. One can only hope that he goes first.

One mother states the following during an interview:

We cherish the memory of the martyrs’ blood. I’m proud of my son’s martyrdom. I am prepared to sacrifice my life. All I want is martyrdom. I’m willing for all my children to become martyrs. May my husband also become a martyr, and Allah willing, may I die as a martyr. Compared to others, what I sacrificed is nothing. It’s true I sacrificed a son, but others have sacrificed two or three. I hope more of my sons will become martyrs.

Perhaps this week, she will get her wish. The next time I see a muslim mother weeping openly in front of the western media, I may still feel somewhat saddened, but it won’t be for her. For all I know, she will celebrate that evening.

Again, we need context. In Canada and America, we don’t see ministers, pastors, or rabbis preaching in their churches, chapels, and synagogues against the people of the Middle East. You won’t hear a religious leader of the Jews or Christians calling for the blood of Arabs to appease God or His Son. We don’t hear calls by western premiers, prime ministers or presidents, senators or congressman calling for the elimination of the nation of Iran or Syria. There are some who would like to see certain elements removed, but not annihilation.

As well, we have a penchant here for honesty and truthful reporting. The enemy, Islam, is in pro da mode. They realize that they are at war with us, by their own choice. As such, they will use any and all means to defeat us, even our own pathetic willingness to swallow everything we are shown. That is why so many states use pro da. It is an effective tool that can be used to cause a society to bear down on its politicians to retreat or to cease protecting itself.

We know for a fact it is effective. We used the same methods in WWII and Korea. Now, the enemy is using our tactics. He has learned well. So well, in fact, he has even found a way to use our own media against us.