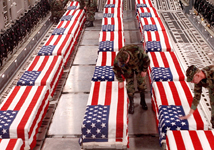 I believe that a nation’s armed forces should firstly be used for the defense of that nation. I also believe that if they are able to be used to rescue others from tyranny, that this is noble and just. It is only a blessed country that is free and able to protect itself. It is truly extra special when a nation has the power to project freedom to others.

There are many young men and women in the United States that feel the same way. They are the one’s who enlist of their own free will to serve their fellow man, and to serve their country. There are many more who don’t understand selfless acts such as enlistment. The reason for that is simple; they are selfish individuals through and through. Somebody once said about having faith, “If you don’t believe in something worth dying for, you probably don’t have much worth living for.” You see, it is only the love of giving of yourself, perhaps even your own life, that is true love. All other forms are simply infatuation and selfishness. I find that most people of faith or those who come from homes where it resides are the one’s who understand what giving truly means. This is not to say that people who don’t practice faith never give of themselves, but it is much rarer a thing in those circumstances.

We hear more and more people in our midst asking, no, demanding that the boys come home from Iraq. We are told over and over again that Iraq isn’t our problem, nor that of our children. I find this incredulous. Not only do those people doing the protesting have no love strong enough to sacrifice for their country, but they also dishonour the men and women who have freely sworn to do their duty, that being following the commands of their commander-in-chief.

When the U.S. military pulled out of Vietnam, millions of people lost their lives. The anti-war crowd was able to influence a great many politicians who did not have the courage or fortitude to be leaders. They were simply politicians. Should the same soft bellied bunch once again have their own way, millions more will die in Iraq. Those who die will be the same men and women that the protestors claim George Bush murdered in the taking in Iraq. To stand up and decry civilian deaths at the outset of the war, and then demand Americans vacate Iraq leaving a vacuum is plain lunacy and the uttermost degree of hypocrisy and ignorance.

I mentioned the anti-war crowd. I don’t believe this to be a correct description. It implies that those of us who hope that U.S. troops remain in Iraq are pro-war, and that is just not true. Those of us who support the American invasion and removal of Saddam Hussein are not pro-war, but are in fact pro-freedom. We understand that freedom is never simply given to a nation. It is fought for, and is staunchly defended.

If and when Iraq becomes a democracy, freedom will take hold, and freedom has a way of becoming contagious. That will, in turn, add to the security of the United States. I say if, because those on the anti-war, protesting, self-loathing side of American politics are starting to cry out louder and louder, and if they have their way, then Iraq will indeed become another Vietnam in a type of self-fulfilling prophecy, but only because of a premature American troop withdrawal. Then the protestors will exalt themselves in their ‘wisdom’, not realizing that they were the cause of it.

Those who are blowing up and killing American citizens are not going to go away if the United States suddenly retreats like a cowering dog that has been hit with a newspaper; they are simply going to feel emboldened and empowered. They are enemies of those of us who are not radical Islamists, and their intentions are to kill each and every one of us. Americans are high on the list because they are standing up to the threat. Canadians may be lower on the totem of targets, but we are still on it; don’t be fooled.

To claim that Americans are dying needlessly is simply inaccurate. Americans will die regardless. The fact is that there is an enemy that hates America. If America doesn’t go to them, they will simply go to America; this has already been illustrated. It is wiser for a nation that is capable, to take the fight elsewhere and not fight it on their own soil. If some on the hill have their way, and the U.S. troops cut and run, then the evil will simply come to American shores. Evil doesn’t simply evaporate.

Americans should be thankful that they have a president that knows this.