Why is it that the rest of us fight for the rights that so many others are quick to hold on high as sacred and at the same time eschew any effort required to retain them?

Once again, Montreal has become the focal point for all that is wrong with liberalism. Perhaps the reason that conservatism has such a hard time in that city is because conservatism embodies common sense and logic; two qualities that, despite having a fine university, Montreal is sorely lacking in.

As was the case when conscription was introduced in both world wars, crowds of protestors have once again taken to the streets of Montreal to decry the government’s audacity in taking a stand and supporting a cause. Once again, Montrealers think that simply calling for peace will cause the aggressors of the Middle East, (Arabs), to quickly lay down their weapons.

Estimates put the protest march that occurred this weekend in Montreal at between 15,000 and 25,000 people. For the most part it was peaceful but it was nonetheless disturbing in tone.

While Canadians do and should have the right to protest and to speak their minds and hearts, sometimes doing so shows just how little academic or moral fortitude one has.

Media accounts have reported many disturbing attributes of the march including the prominent displaying of anti-Semitic rhetoric, pro-Hezbollah signs and support, and of course the ever present Islamic Jihad calls to denounce Israel and the United States. Quite frankly, I am ashamed that these protestors have the right to call themselves citizens of my country.

One cannot help but question the lucidity of anyone who attends a ‘peace demonstration’ and holds a sign calling for the support of Hassan Nasrallah, the butcher who oversees Hezbollah. Peace is the very last thing that he wants. Shouts of ‘Vive Hezbollah’ come just short, in my mind, of supporting a terrorist organization, and have no place on our soil. If Hezbollah is so wonderful to these people, I suggest that perhaps the boats used to evacuate citizens from Lebanon could be used to transport these people TO Lebanon where they would be free to openly support Nasrallah.

One protestor apparently felt as sick at the sight of placards supporting terror. “These paramilitary groups like Hezbollah have committed massacres in my own country,” said Nema Alborz, a post-doctoral student from Iran. “It saddens me to see the flags of Hezbollah. We have to take up the flags of Lebanon.”

Hopefully this thought will be echoed through the hallways of McGill University.

Another citizen, Erin Morin, wished that “They should all get together and try to find a way to live in peace.”

Very simplistic, Erin, but it takes either two parties who want peace or one that is strong enough to compel the other to cease hostilities for that to happen. The former idea is not possible, as only one side truly wants peace, and the latter formula is currently being implemented.

“Our country has the right to live,” 35-year-old Asem Samhat said, denying Canada’s assertion that Hezbollah is a terrorist group. 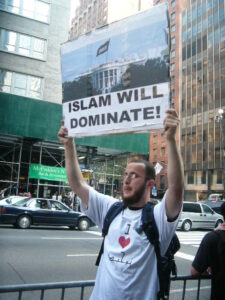 This supporter of Hezbollah sees the inherent right of Lebanon to live, but supports a group whose main reason is to deny Israel’s right to live. What a nonsensical lack of reason.

One anti-Semite (sorry, there is no other word that will fit here) held up a sign declaring that “Israel learned from Hitler and the student has surpassed the master.” How incredibly outrageous. If Israel had surpassed the master, there would be tens of thousands of Arabs piled up in the Sinai. If anything, it is the Nasrallah’s and Ahmadinejad’s of the Middle East who have picked up right where Adolf left off, including the agitations and anti-Jewish rhetoric.

It is wonderful to live in a land like ours where one can voice their thoughts and beliefs, but it is a sad thing to watch those who oppose real freedom to be able to do it while standing on the graves of those who died to give them that right.