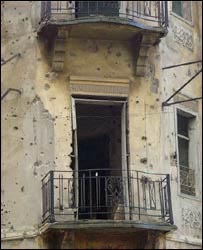 I received an email from a regular to this site yesterday. They have sent me many very encouraging letters of support and understanding, but it seems that my unwavering support of Israel is, in their opinion, over the top.

Here is some of the letter:

It was nice to read your comments while they were related to Canadian political and social issue. I am a – conservative. However, I am sick of your blind support for Israel – the root cause of all the wars in the world…… My “Favorites” link to your website has been deleted;

I will not pass judgment on the person who wrote that to me, but needless to say I am somewhat disappointed. I replied that I could understand that people often have differences of opinion, but I must admit I am somewhat troubled by their anti-Israeli stance.

I feel that there is plenty of evidence to support my backing of Israel, the least of which is this article (http://voanews.com/english/2006-08-05-voa12.cfm) that was posted on the Voice of America website earlier today.

The article is written by VOA correspondent Challiss McDonough and was filed this morning, August 5, 2006. It contains several statements by Challis, who is in Tyre and has firsthand knowledge of the day’s events, that reaffirm my position on the Lebanese assault and of Israel’s right to carry out its offensive.

The reader noted above spoke of my ‘blind support’ for Israel. As in any war or conflict, nobody can profess to know all of the missions, actions, or deeds of any side. I am not naive enough to believe that no Israeli has ever targeted a civilian or done something monstrous. That is a given for any army. Evil does not reside on any one team. There is enough of it to go around.

Having said that, it is a totally different thing when one combatant is intent on killing civilians and the other is intent on stopping incessant attacks. Back to the McDonough story.

Challiss’s report this morning dealt with the assault on a residential apartment building in Tyre, not unlike the apartment buildings that we have all been shown on the nightly news as child after child, woman after woman, is pulled from its ruined remains. While the media feigns outrage and shock, I have been stating that Hezbollah is known to use innocent people as shields and is most likely launching attacks from behind or around these structures.

Challis closes her article with statements by residents of the apartment block and surrounding areas. She is quick to mention that it is a residential neighborhood, and highlights that point in her audio report that was a link above her story. The word ‘residential’ is stressed.

A woman named Fatmeh shows Challis the damage to her home. “We don’t have any armed youth who come here,” she said. “We don’t have rockets. We don’t have guns.” Unfortunately for Fatmeh, Hezbollah does. Right across the street from her home.

Challis mentions the fierce gun battle that ensued between Hezbollah militants and Israeli commandos this morning. The battle took place at the most surprising of places; the residential apartment building across the street, the one where all of the ‘civilians’ live.

At the scene of the raid, there are signs of a violent struggle, and residents of nearby apartments describe a fierce gun battle between Hezbollah militants and Israeli troops. Let’s look at the column again:

Hours after the attack, a second-story apartment was still smoldering. All the windows have been blasted out, and the walls are charred. Blood is dripping from the back window.

About 50 meters away, in a parking space, a large pool of blood is congealing on the ground. The walls are pockmarked with bullet holes. A trail of blood droplets leads away toward the street.

Hezbollah claims it is the blood of an Israeli soldier who was killed. Israel acknowledges that eight of its troops were wounded in the assault, two seriously.

At this point, I must point something out that struck me as urgent when I read this. We have seen the coverage of buildings in Lebanon where the dead have been carried out. Israel has stated that the buildings were also being used as launch pads and as Hezbollah bases of operation. This assault this morning was done the way it was to once again, beyond any doubt, show the world that those claims were accurate.

This building is no different than the previous one’s hit with air strikes in other parts of Lebanon, except for maybe the fact that Israel, facing increasing international pressure, has had to attack the militants from the ground instead of the air. This is resulting in higher casualties for its own forces, probably to the delight of Hezbollah. Israel this morning sacrificed eight wounded soldiers to appease calls for ‘restraint’ and to spare the civilians that Hezbollah uses for cover. Still many foolish Lebanese praise Hezbollah. They should be aware that the next time a rocket leaves the balcony above their heads bound for Israel, they should perhaps vacate their home and anything within a few square kilometers.

Also, with Hezbollah itself claiming that the blood at the scene was from an Israeli soldier who was killed, there is no room left for any doubt that Hezbollah was indeed there. In a residential neighborhood, in a building, beside women and children.

Hezbollah claims to have repelled the attack. Israeli military officials said the raid successfully targeted Hezbollah long-range rocket launchers, as well as leaders of the unit that launched a rocket attack Friday on the Israeli city of Hadera, some 80 kilometers south of the border and the deepest rocket attack into Israel since the conflict began. It is not clear how many Hezbollah militants were killed or wounded. The group does not disclose its casualty figures.

So, Hezbollah does not use residential areas for bases or launchings, yet was able to repel this attack. How is that possible? If they do not occupy residential areas, then the Israeli assault was on civilians, not Hezbollah. Still, Hezbollah claims to have stopped the assault. I must admit that they have a funny way of declaring victory, as Israel was able to shut down one long-range missile site.

One of the bombs dropped during the raid destroyed the main road leading out of Tyre toward the north. That will seriously complicate efforts to bring aid shipments into the city by road.

Indeed. It will also be a lot harder to move long range missiles into Beirut.

In other articles, I have supported Israel and have even called for them to go as far as Iran. After all, it is the ayatollahs and mullahs and whoever else has a catchy name that are behind most of the instigation and trouble in not only the Middle East, but throughout the world. It is the Arab t, not the Jew, who is responsible for most of the wars today. Iran seemed intent on proving my assertions this week as they finally admitted to giving Hezbollah long range missiles. It was a mute admission, as most people already saw the obvious link. The diehard pacifist, unable to deny the link between Iran and Hezbollah any longer, will now simply change their argument to state that Iran is justified in helping their Arab brothers stop the Israeli aggression.

In February 2006, I wrote a column in which I stated in the title a simple conviction that I had. In that article, entitled ‘Iraq Slides Toward Civil War’, I wrote that a civil war was likely as insurgents from Iran were intent on creating such a climate. It would be to the benefit of Iran’s fundamentalists to destabilize their closest enemy. Six months later, the headlines are screaming that Iraq is on the brink of civil war. Again, until the world gets to Tehran, these insurgencies and provocations will continue and intensify.

I bring that up not to pat myself on the back, but to simply illustrate that as of today, my convictions on the Israeli Middle East situation have been constantly reaffirmed by the events that have been unfolding. I see no need to change them.