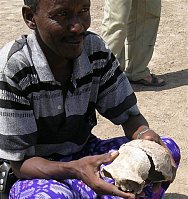 Apparently, some scientists aren’t too concerned that we are all going to die this year from the weather. It seems that there is still an entire contingent looking for that elusive ‘missing link’, the one that so many biology students have been taught that there are billions of.

The missing link that I refer to is the big one. Yes, that transitional hominid that will once and for all dispel any disbelief that we once swung through the jungle.

Looking at the latest picture that has been released showing the latest find, one cannot fail to notice (if one looks) that the two pieces of skull that the gentleman is holding are not even the same color, nor do they even remotely appear to join together as one. The dimensions of the rear half suggest that it is from a bigger skull than the front half. “I will offer, your honour, that the only missing link here is the one between these two pieces.” A part of me always wanted to argue in front of a jury of my peers.

Let’s look at some of the previous evidence that the field of paleontology has brought forward and proclaimed as ‘the answer’.

The Piltdown Man was hailed by science to be thee missing link. Finally, the god of evolutionism, Charles Darwin, could be worshipped by those whose life work was fueled by their desire to disprove the existence of God.

The Piltdown Man gets a lot of mention. Even evolutionists point out that those who refute the theory of evolution always evoke the P. Man. Why? Because it is there. And it is one of the biggest frauds ever committed in the name of science. It almost surpasses man made global warming. In fact, some science books today still refer to the P. Man as a credible fossil.

Piltdown Man was made up of several pieces of bone, some human and some wild animal. It seems that somebody had taken a lot of trouble to fabricate a specimen that appeared to join monkeys with man in a riveting (to some, I suppose) account of the progression of modern man. All it did was cause a lot of scientists to look like monkeys.

Nebraska Man was even better. Nebraska Man was presented in a full drawing, along with his mate. Yes, there he was for the world to see. Below the elaborate drawing that was released to the world through an artist’s rendering were words that described the drawing as “…merely the expression of an artist’s brilliant imaginative genius.” No kidding. After all, the only thing that the artist really had to go by was a pig’s tooth found by a rancher in Nebraska. Who’d’ve thunk it?

Listen to what an acclaimed professor of anatomy from England, Sir Grafton Elliot Smith, had to say about this wonderful discovery. “I think the balance of probability is in favour of the view that the tooth found in the Pliocene beds of Nebraska may possibly have belonged to a primitive member of the Human Family” Yes, he thought that it was probably, maybe, possible.

Lucy was another absolutely, for sure, transitional piece. Or so we were told. Lucy was believed to be a three and a half foot high female something. Scientists claimed that she was an early hominid. Now, the only thing for sure is that she was there earlier than they were. She was collected along a rocky stretch of desert in Hadar, Ethiopia, and was apparently the earliest recorded suicide bomber, because she was scattered about in some pieces no bigger than mere fragments.

There are others, such as the Java Man, Neanderthal Man, and a few lesser known examples that, in the end, were simply unable to bridge the divide between man and beast.

The most recent discovery was the Little Lady of Flores, which involved several intact skeletons on the tiny island of Flores in Indonesia. While there have been several more skeletons found, she is no missing link, even though she was hailed as such at the time of her discovery. She is now to believed to be part of a race of small humans. Kind of like our children, one would think. So, we have a tiny race thought to have hunted tiny elephants on this tiny island. Stay tuned for evidence of a giant named Gulliver.

I guess you can tell that I don’t put much stock into this missing link business. My thinking is that if it really did happen, then we shouldn’t need to fabricate evidence to back up our claims, should we? There should also be an abundance of proof, but there is nothing conclusive, only a huge mountain of speculation, fraud, and half truths. Hardly compelling reasons to get on board the missing link bandwagon.