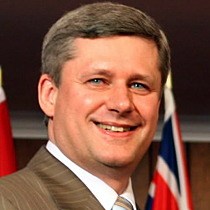 It seems as though some reporters boycotted yesterday’s announcement in regards to Canada’s increase in aid to the desperate Darfur region. While reports are somewhat vague, it appears that some reporters were excluded from the question period. Is it just me who thinks that the chickens may have come home to roost? Makes me kind of hungry thinking about it.

During yesterday’s Prime Ministerial press conference, a handful of reporters were miffed because the PMO had decided to choose which questions would be answered ahead of the event. While the PM’s office stated officially that this was to reduce the chaos during question period, we all know better than that. It seems that Stephen Harper is being overly generous in his handling of the affair.

I can’t count how many times over the last decade that Stephen Harper has been intentionally maligned and portrayed in a false light by our ‘bias free’ media. Every public figure definitely needs their knuckles wrapped now and then, but the concerted effort by many to target anyone and anything conservative isn’t just my old paranoia kicking in. It is fact.

Take for example the front of one of Canada’s biggest newspapers on election day. A half decent picture of Paul Martin, the same for Jack Layton. What about Mr. Harper? How about a pose with one arm outstretched. Perhaps a take on the infamous Nazi leader? I must admit that the photo tied in perfectly with the incessant media penchant for exposing some sinister hidden agenda. As well, the day after the election found us looking at the same strange phenomenon.

I can imagine the hatred that was spread around some of the big media outlets when it was clear that Stephen was going to win the election. I can only wonder at what thoughts went through the minds of those that run them. Perhaps something to the effect of “We had better neutralize this guy as soon as possible.”

What has happened now is nothing short of promising. Conservative support is at its highest level in 20 years. Finally, we have overcome the cries of hidden agenda and religious extremists. Canadians have seen first hand that the prime minister means business. They have also seen the opposition play petty with a number of issues, including the ridiculous tarnishing of Gwyn Morgan, a reputable man who was willing to take a government job for $1 a year.

Prime Minister Stephen Harper’s public display of frustration has resonated with Canadians who are also frustrated at petty politics and the obstruction to any real change.

As for those who boycotted yesterday’s conference, I say goody for them. I hope it serves their careers well. Tantrums don’t pay off at my job, but hey, I am not a reporter. Perhaps they had not heard the latest poll numbers? Oh well, there is always the sports beat for the next say, 6 years.

At any rate, it looks good on them, doesn’t it?