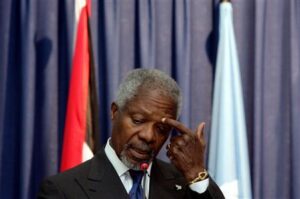 Kofi Annan, showing once again just how little wisdom he has, yesterday demanded that Israel lift its air and sea blockade of Lebanon. Who does this man think he is to suggest that Israel simply allow the floodgates of Hezbollah supplies to reopen unguarded?

Such a move would erase any and all gains that Israel may or may not have made during the month long battle with Lebanon’s Hezbollah. It would also mean that every single life lost in that fight was lost for nothing. It is a good thing for Israel that she has a leader with a backbone who is willing to tell the United Nations what it ought to.

It is becoming clearer by the day that Israel is surrounded not only by hostile nations, but by a collection of them within the United Nations itself.

Some of the statements that have arisen this week have been very blunt, so much so that only a liberal could still miss the point of them. Take Lebanese prime minister and Iranian puppet Fouad Siniora for example. He has come out and stated that a peace deal with Israel is out of the question, backing my earlier assertion that Lebanon is not just a country caught in the crossfire, but one that actively supports terrorism against the state of Israel.

At a press conference, Fouad said that “Lebanon will be the last Arab country that could sign a peace agreement with Israel. There will be no agreement with Israel before there is a global peace deal that is just and lasting.” Sounds like a man intent on achieving peace in somebody else’s time.

Kofi Annan has been travelling throughout the Arab Middle East seeking advice on how to proceed with the situation in Lebanon and Gaza. He again used the word ‘capture’ to describe the Israeli soldiers being held by Hezbollah, a term to suggest that they are legitimate prisoners, while Hezbollah leader Hassan Nasrallah has himself stated that the prisoners were kidnapped, but Kofi cannot seem to bring himself to say that word. I suppose it would complicate things a tad.

On another front, Syria continues to insist that it will not allow U.N. forces on its border with Lebanon. The Lebanese government, in tandem with Damascus, has stated that it is willing to place 8,600 of its own soldiers on the same border. We have seen and even heard from the government of Lebanon itself that it is no match for Hezbollah. Both Lebanon and Hezbollah receive massive funding and support from both Tehran and Damascus, so placing only Lebanese troops on that critical border would be tantamount to the Syrians policing themselves.

Watch for this issue to grow, as Ehud Olmert and his Israeli cabinet know full well that if that border is not monitored, Hezbollah will continue to have unlimited and unfettered access to all of the arms that it wants to have. It is very sad to see that this very basic point in logic has escaped Kofi Annan, either by chance or by design.

Italy, now in charge of the United Nations forces within Lebanon and the nation with the largest contingent of soldiers in the area, has made some direct statements directed at Syria. Italian Foreign Minister Massimo D’Alema said the international community would “not stand by and watch” if arms passed over the Syrian-Lebanese border. “In Syria they should also know that if arms arrive from Syria . . . the international community will know about it and won’t stand by and watch.”

While Mr. D’Alema’s words are encouraging, it will have to wait to be seen if the international community has as much fortitude and determination as he apparently does.

My thought on it? Don’t hold your breath. If the United Nations was any use at all, Hezbollah would already be a mute point and Iran and Syria would repent of their terrorism support with a knife at their throat. But we live in a diplomatic world, so instead we must talk about it. And talk. And talk.