Words are so unnecessary when a decision is so wrong that anyone with eyes to see can’t miss it. However, I have still written my thoughts on today’s complete travesty of justice.

I hope that I am the first to call for Attorney General Michael Bryant’s headresignation. In what is clearly the worst decision that I have ever seen from an attorney general, Mr. Bryant has just opened the door to something that most people who understand the word justice never imagined would turn up in a democratic country like Canada.

There are now two forms of justice in our country. Like in days of old, the rich now have the means by which to reduce the time that they spend in prison for their deeds, in some cases to zero, while the rest of us not fortunate enough to have a couple of million in dirty money to spend will do our entire sentence.

The press is quick to report the sentences that these thugs have received. What they are not telling you is how long these sentences will mean in real terms. 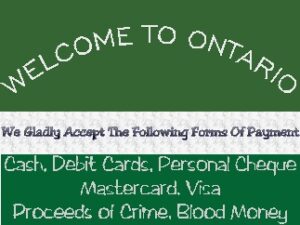 Antonio Borelli, the man who pulled the trigger, will receive a 12 year sentence. After taking into consideration the 2 years which he has already served awaiting trial and giving him a 2-for-1 bonus for it, his sentence now comes down to 8 years remaining. With our statutory release legislation which states that an inmate may be allowed to serve the last third of his sentence in the community, that brings down the total time of incarceration to still serve to 4 years. That’s right, the number four. Boy, are we ever getting tough on these guys.

Paris Christoforou, Mark Peretz and Peter Scarcella would each get 11 years behind bars. To convert this into Liberal years, those men will be out before 4 more years pass. The fifth person convicted in relation to this crime will walk free after being given a 3 year sentence, having already served 2 years at the usual Ontario “2-for-1” inmate deal.

There has been no word on whether or not any of the suspects or their lawyers will be able to collect air miles on the $2.5 million buy-off.

While many people have come out in favour of the payment to Mrs. Russo, they are missing the point. Our justice system isn’t only about the victims of crime, it is also and foremost about justice.

Is it any wonder Canadians continue to lose faith in our justice system?