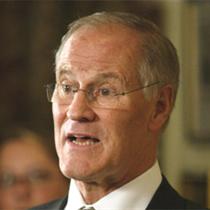 In a case of political snafu, interim federal Liberal leader Bill Graham has eluded to the fact that he believes the federal Liberals should follow Dalton McGuinty’s lead to win back our trust.

Now, I don’t know about the rest of you, but the very last thing I would do to attempt to win back Ontario’s and Canada’s voters is try to make myself a carbon copy one of the biggest liars in Ontario politics in recent memory. Perhaps Bill is simply suggesting that such a move would be a huge step forward from where the federal Liberal Party is presently at. What a statement that is.

Speaking to the Liberal Party’s Ontario wing yesterday, Mr. Graham suggested that “Just as Dalton and his team did, we can earn back the people’s trust and give them an alternative.” I am going to suggest that Mr. Graham, as interim leader of his party, start to read about the McGuinty legacy. If one in such a position is going to start to point out other Liberal leaders as examples, he should first make sure that they are not as despised as Ontario’s premier is.

Dalton McGuinty campaigned on a platform of no new taxes, no new taxes, and again, no new taxes. Once elected, he threw out his campaign booklet, burned his pledge to Ontario voters, and immediately used the oldest of Liberal tactics. He stood up and said, “Oops, our books aren’t where they should be. All bets are off.”

Taxes were immediately hiked, and Ontario consumers were given a new structured hydro bill which, like a helium balloon, keeps going up even though the people were promised a rate cap. They were told that they would fork over upwards of $900 in some cases for their health care thanks to the new Ontario health premiums. Dalton’s pledge to roll back highway 407 toll rates vaporized in front of oncoming traffic, the promise of 2 cents per litre in tax revenue for our cities was put back into the magic hat, and pretty much every other election promise was castrated.

Take the latest rankings on Google, if you choose to, and let them speak for themselves. I just did a web search for the terms ‘Dalton’, ‘McGuinty’, and ‘liar’. I got an astounding 12,900 possible related website results thrown back at me. It seems that Mr. McGuinty made more than 230 promises to the people of Ontario during the 2003 provincial election, and forensic auditors are still looking for proof that he has kept at least one of them.

So, now knowing what we know about Ontario’s premier, I truly need to ask why Mr. Graham and the federal Liberals are so keen on trying to become a carbon copy of such a group. Again, let’s look at those words. “Just as Dalton and his team did, we can earn back the people’s trust and give them an alternative.”

From that statement, it would seem that Mr. Graham and his colleagues are openly planning to once again promise us the moon and front row tickets to the rest of our lives, but do not intend to honour their commitment. Might I suggest that Mr. Graham also plans on implementing a federal health premium?

I must admit that Mr. Graham is becoming an asset to Canada. He is single-handedly putting as much water back into the hold of the S.S. Liberal as the spin doctors have been able to pump out of it. At the present rate, the Grits will be lucky if they don’t need to start talking party merger with the NDP to end the vote splitting among Canada’s ‘progressive’ voters.

I can already here the next federal Liberal leader while addressing the nation one day: “It seems that the government’s books aren’t in order. We are going to have to put those promises on the back burner.”

Let’s just hope that they don’t start promising us tax breaks. I simply can’t afford the Liberal’s definition of those.