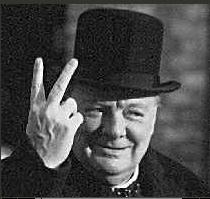 I recently watched a video that contained some of Sir Winston’s famous speeches. Listening to his voice was soothing and sad. Listening to the conviction in it was inspiring. It provides a stark contrast to the politicians in our midst today. Indeed, they are politicians often and statesmen seldom.

As I listened to the words of the man who led his nation against ‘Hitler and his Huns’ as Winston would call them, something was missing from his speech. There was no political correctness, no measuring of his words unless it was necessary to get across to the listener the gravity of the situation. He was never apologetic or condescending. He simply said what he believed in his heart, not what he knew that his audience wanted to hear. He was honest and straight-forward. He was honorable.

Myself not being born until 1967, I must lament that I don’t think that I have ever seen a Winston Churchill. How refreshing it must have been to hear a real leader. Not a panderer to the masses, but a conductor of a great orchestra with us as the instruments.

One of the most striking things about his speeches is the way he was so forceful and intent with the course his nation and his beloved subjects would stay. There was never a debate, just full steam ahead. For their part, Britons should be proud for having allowed this man to lead them.

As the war in Iraq unfolds and the casualties mount, one can find numerous references to cowardly summations of the situation and plenty of politicians who continue to wave the white flag of surrender. They do so for many reasons, none of them noble. They call for America’s defeat because they believe the socialist world order propaganda emanating from the press and the United Nations. They do it for votes as they keep their fingers on the pulse of the nation’s mood, and they do it because they simply cannot see the connection that Saddam played in terrorism, including paying the families of homicide bombers. In short, they are not leaders, but simply serfs.

I wonder if the people today could stomach a real leader? My appraisal of our culture leads me to believe that we have become more like the cowards of WWII France, who would sell out their children and their children’s children to obtain a false peace. They would not understand that it was a false peace because they lacked wisdom. I guess that my opinion of my fellow countrymen may seem harsh, but consider the whispers and the voices now calling for Canada to leave Afghanistan. They grow louder with each new soldier that falls to evil.

During WWII, Winston Churchill declared to Germany that he would rather see London in ruins that to capitulate to one of such loathing as Hitler. “We would rather see London laid in ruins and ashes than that is should be tamely and abjectly enslaved” His defiance was met with more and more bombing raids that eventually took more than 40,000 lives in Great Britain. Would today’s generation stand behind such a leader? Would we, having the benefit of history, have the fortitude to stand against tyranny or would the sacrifice be too high for us to fathom today?

Evidence around us says that there would be some who would understand the words of such a man, but that most would not. A leader of that strength would be subject to a public lynching via the media and would be called a failure for causing such unnecessary carnage.

In a speech at the onset of WWII and Britain’s involvement, Churchill stated the following: “But now we are at war. And we are going to make war. And persevere in making war until the other side have had enough of it.” Today, it seems that even though it was Al Qaeda who attacked freedom and democracy in America and by association of our ally on us as well, that we are not willing to persevere in making war. It seems the cost of eradicating an external threat to not only our soil but our way of life is viewed as simply too high, even for those fence sitters who bare none of the costs. I say liberty has no maximum price. To the last man, if necessary.

When Winston Churchill addressed the heads of state of most of Europe, he talked about the battles ahead and the belief that their enemies would never be victorious. “We know it will be hard. We expect it will be long. We cannot predict or measure its episodes or its tribulations. But one thing is certain, one thing is sure, one thing stands out stark and undeniable, massive and unassailable for all the world to see. It will not be by German hands that the structure of Europe will be rebuilt or the union of the European family achieved.”

I have been waiting for a western leader to stand up and declare something of the sort for our nation. Perhaps I can suggest a few words. “We will not be bullied about by those who wish to eradicate our rights and freedoms. We will not allow a handful of islamic extremists whose main tool is hatred of all others to invade our nations which are beacons of hope for all mankind. The actions of but a handful of cowards will not undo the liberty of our nation. We will not allow the falling of our sons and daughters to deter us from our course which we know is just. We will not sit idly by as nation after nation around the globe is usurped by the fundamentalism of death which is falsely paraded about as a peaceful religion. We will not be so fooled. Our nations have been here for hundreds of years, and will remain symbols of love, charity, and freedom for hundreds more. If that is not the case, then we are here for naught.” That may not measure up to Winston, but I gave it my best shot.

Drawing a parallel between the struggles that we face today and those that we faced at the hands of Germany, Italy, and Japan may seem to some as over the top, but I believe there is a great deal of comparison. We are perhaps in a more fierce battle today, as it is one that is nearly invisible, thus failing to capture the support of all of our citizens. It is being fought in a different way, but the stakes are just as high. Our enemies have thus far been very successful. They have exposed our lack of resolve, our lack of understanding as citizens to the fact that we are fighting an evil force, and they have not only stuck down thousands of our citizens, but they have divided our nations, our people, and our governments. They have succeeded in undermining the global consensus that would be necessary to vanquish the enemies in our midst quickly and decisively.

In closing, I once again take my hat off to the likes of George W. Bush and Tony Blair. They are but a few who dared stand up to a tyrant who, like Hitler, thumbed his nose at the will of the rest of the world. An aggressor and invader of his neighbours, Saddam played with the U.N. (a useless organization in its present form, if I may), and refused to comply with resolution after resolution. Many countries which failed to authorize the use of force for such behaviour later turned out to be involved in the oil-for-food scandal that has further weakened global consensus.

In failing to reach agreement on the basic fundamental principle of being able to enforce its resolutions, the United Nations has been made of no effect, a situation which was prevalent at the outset of WWII.

Sir Winston, our world is a much worse place without the likes of you. I pray that the Lord would one day again see us worthy to have such a statesman in our midst.