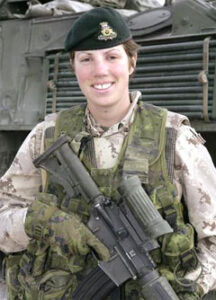 Very often when it is time to sit down and write my daily column, I can not come up with a subject that is worthy of your limited time. I like subjects where I believe I can make you, the reader, stop and think, or at least strengthen your conviction on a subject.

Today wasn’t like that. I have had three or four worthwhile topics pop into my dome today, and they were all political and worth an editorial. Before I got started though, I read the following words from the parents of Nichola Goddard, the wonderful, courageous woman who gave her life for you and I this week.

I have heard all of the arguments regarding Afghanistan and have heard the detractors and supporters of our mission alike. For those of you who think Afghanistan has nothing to do with our lives or freedoms, I contend that you simply do not understand the dynamics of global politics. That, however, is not today’s topic.

I watched the video of Nichola that was made just a short while ago as part of a television special. She gave an interview telling how she had enrolled in the Canadian Forces to pay for school and ended up “becoming a lifer”, as she put it. She fell in love with the job and all that it entailed.

After watching the video, I felt connected. She was no longer just another number as too many of our fallen are. I don’t mean to sound disrespectful, but when there are mounting casualties, it is hard to mourn for each loss all over again. I don’t think that many of us have what that would require. With this young lady, I watched her speak, heard her passion, and got to share her beautiful smile. She had a warm smile, and a reassuring way about her.

By watching that video Nichola touched me and made me so much more aware of all that her and her comrades risk daily. She also made me able to mourn for all of our fallen heroes.

Upon reading the touching tribute from Nichola’s parents, I found their words to be inspiring and quite unlike the words of some other war parents, but again, this column is not for that purpose today.

The story below was printed by the Canadian Press. I will trust that they would allow its reprint as the words belong to all Canadians. They come straight from the heart of two courageous parents for whom I promise I will pray tonight. The letter brought me to the brink of tears with feelings of sympathy and pride. Once again I find myself in the presence of a hero’s memory.

Tim Goddard: Our daughter, Capt. Nichola Goddard, has been portrayed in the media as a strong leader, an officer who cared for her soldiers, one who believed in the importance of her work and of the Canadian mission in Afghanistan. She was all of those things, but she was also so much more.

Nichola was an avid outdoorswoman. She was an accomplished cross-country skier, and when we lived in those provinces she was a member of both the Alberta and Nova Scotia Nordic ski junior women’s teams. She loved camping and hiking especially in the winter, perhaps because of her years living in northern Saskatchewan and on Baffin Island.

She loved animals, she had two dogs and two cats that she brought from the animal shelter in Manitoba and she dreamed of owning a boarding kennel when she’d retired from the army. Nichola had a huge smile, and an even bigger heart. She was a volunteer scout leader and a faithful member of the Anglican Church.

She was always a caring person, once during a ski race one of the other competitors became hypothermic and collapsed by the side of the trail. Nichola stopped and helped him down to the finish, losing any chance of winning that race for herself. After that, her friends all called her Care Bear.

At Shilo, she agreed to shave her head as part of a cancer fundraiser. And her men gleefully auctioned off the right to wield the razor. She made a lot of money.

Sally Goddard: Nichola was born in Madang, Papua New Guinea, where we were teaching. She grew up around the world attending seven schools before graduating from high school. She often joked that one reason she joined the army was for the structure.

Nichola spent her childhood growing up with her two sisters, Victoria and Kate, in places such as Black Lake, a native reserve in northern Saskatchewan, where she won a prize for being the best Dene speaker in kindergarten. We then moved to Dundurn, just outside Saskatoon, where she learned how to ride a bike and to skip a rope, something she hadn’t had the opportunity to do on the reserve. We spent hours in the backyard turning the rope so she could practice.

In Baffin Island, Nichola and her two sisters took a Skidoo ride with their dad onto the ice to finally see the sun again. It was February 22, and Nichola took off her snowsuit and danced in the sun. Nichola was the eldest of three girls.

In her regular letters home from Afghanistan, Nichola observed that the work of her father, Tim, an associate dean at the University of Calgary, and his colleagues in the field of post-conflict educational development, was only possible because of people like her and her men. `I do what I do, so you can do what you do,’ she said.

Tim Goddard: We spent Christmas together in Wales with my mother and with many members of our families. Nichola knew she was going on this deployment. She was aware of all the risks, and she wanted to make sure that she had that opportunity to spend time with family.

She went to Sault Ste. Marie with Sally’s parents, her grandparents, and before she went on the final deployment she came back here to Calgary and gathered with all of us for a weekend of family time. The one stipulation she gave before agreeing to that family weekend was that it not be a sad weekend. It wasn’t.

We spoke with Nichola on Monday night. She called from Kandahar. She obviously was not allowed to give mission details, but she basically said she was sorry, that she would not be able to phone on Wednesday, which was my birthday, and from that we construed that she would be outside of access to a phone, so we figured she was going outside the wire.

She was anxious to get out of the base. She was far happier with the hills. She was keen to get on with the job. She was never a paper pusher. She wanted to be a combat officer. She was happier outside the wire with her men.

We’re in the process of setting up a scholarship fund in her memory. These things take a lot longer than we knew or anticipated, so we’ll release more information once we’ve got that.

The funeral will be held here in Calgary at St. Barnabas Anglican Church, which is the church in which she was married, so few years ago. We don’t have a date yet, as you can appreciate the logistics of bringing her home are still being worked out. We do know that she’s leaving — there is a ramp ceremony as they call it in Kandahar on Friday — but after that we haven’t got details yet.