For as long as I can remember, science has been paying homage to Charles Darwin, the man who spurned his faith and set off to prove that we simply happened. His theory of evolution is widely accepted scientific basis, and as such, scientists continue to grasp for the missing link. There have been so many stories in my lifetime that have claimed to find one that it is becoming somewhat humorous. I figure if I start to document them now, I will have a book by the time I retire.

In an ongoing battle against bad science and poorly written articles, Conservative Joe pokes holes in the latest ‘Missing Link’ nonsense. He also attempts to shrug off his sensible tone and to become somewhat humorous. Hey, at least he tries! 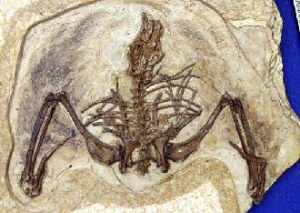 Once again science has come up with a transitional fossil. Yes, friends, we aren’t just barking up the proverbial tree anymore. We now have physical evidence that many meat eating dinosaurs eventually went to the birds.

For many years, leading paleontologists and evolutionary biologists have asserted their belief that the dinosaurs evolved into birds. The theory was publicized in the movie “Jurassic Park”, when one of the lead characters was giving a heads up to a group of youngsters.

Now, scientists have apparently found the oldest known bird. Perhaps it can be known as the ‘Pteraducktyl’. I know this may sound a little daffy, but it’s true.

The wildly exciting proclamations by various individuals has me on the edge of my seat. I can feel their excitement. When Matthew Lamanna, assistant curator of vertebrate paleontology at Carnegie Museum of Natural History in Pittsburgh, first glimpsed the fossils he exclaimed “I was totally blown away. I was stunned!” I think he was still talking about the fossil. And who would doubt a guy with a title that long?

When I began to dig into this ‘stunning’ development, I started to see the tell-tale suspicious inconsistent data trail. This is stuff that is nonchalantly added within the text for accuracy, but which is only briefly touched on and usually put somewhere in a small sentence. It also usually cancels out a previous claim. Take for example this: With most parts of Gansus accounted for – minus the skull and neck – scientists reconstructed the bird and produced something that looks strikingly similar to the modern loon. There you have it! Come on, now. How can you be missing the head and neck of all these fossils and still come up with “something that looks strikingly similar to the modern loon”? Wouldn’t something with no head look more like an ostrich or a chicken dinner? “Look honey, doesn’t that bird with no skull look like a loon?” Indeed, the newest find not only resembles a loon, it is ‘strikingly similar’.

When reading about this dinosaur turned bird, there is no shortage of speculation and guessing. One thing that almost every article that I read on the subject agreed on was that this was ‘the one’. There was no longer any doubt as to the progression of the earliest bird forms into modern day birds. None.

Here is a statement by Professor Peter Dodson of the University of Pennsylvania.

1 “Gansus is very close to a modern bird and helps to fill in the big gap between clearly non-modern birds and the explosion of early birds that marked the Cretaceous period, the final era of the dinosaur age. Gansus is the oldest example of the nearly modern birds that branched off from the trunk of the family tree that began with the proto-bird Archaeopteryx.”

In another article, the following statement:

2 What they found is being called the missing link on the evolution of birds.

The Telegraph’s headline said it all:

4 Previously there was a gap between ancient and modern species of birds, and “Gansus fits perfectly into this gap,” added Jerald Harris of Dixie State College in Utah.

There is absolutely no doubt as to the conclusion that the articles are attempting to lead the reader to and that is that Gansus yumenensis is the missing link in the bird chain. Would that not also tell you that they have the preceding form before Gansus and the one right after it? Also, would this not only lead one to believe that there is no more ‘gap’? Consider then, the following statement by the above mentioned Matthew Lamanna:

5 G. yumenensis is in the middle of an “evolutionary sandwich” of three different aquatic birds that were all precursors to modern birds

Did you get that? This little guy is the middle of three evolutionary forms. How do we then reconcile this statement made by Hans-Dieter Sues, associate director for research and collections at the Smithsonian’s National Museum of Natural History :

6 Gansus is an additional “link in a long chain of intermediate forms between Archaeopteryx, the oldest known bird from the late Jurassic, and modern birds

Now there is a long chain of intermediate forms, not just three. Why does the picture keep changing? Scientific data should not vary to this degree or with such frequency. Obviously, there are people with paper degrees that are as confused as I am.

Some of the articles touched on the change from previous ‘opposite birds’ into the branch that leads to the one’s that live today . They were called ‘opposite birds’ because their shoulders were the opposite of modern day birds.

The following statements, when read upside down, were somewhat helpful in determining, by myself in my basement, why there are no longer any ‘opposite birds’. Have a gander:

7 Besides the Gansus, several other ancient ornithuran birds also show they adapted to an aquatic lifestyle, but “they were pretty (much) towards the end of the evolution, and there was a gap between the trend,” Harris said. “The finds add new information.”

About 80 per cent of all fossils they discovered in Changma belonged to Gansus, which contradicts previous discoveries. Previously, fossils of “opposite birds” dominated, he said.

These opposite birds, whose shoulder joint was reversed compared with that of modern birds, were another type of ancient bird that disappeared along with all non-avian dinosaurs at the end of the Cretaceous period, leaving no descendants.

It is simple to figure out why the ‘opposite’ birds died out. Having their shoulders inverted to modern birds would lead one to speculate that flapping their wings would propel them downward. “Whole generations of mutated dinosaur-birds were wiped out. In an attempt to fly, they plummeted downward at high speeds. Gravity didn’t help.” said Dr. Ornithicus from Conservative Joe Laboratories.

Let’s sum up this magnificent discovery.

Scientists have found at least five intact birds in an ancient lake bed in China. No thought has been given that perhaps this ‘lake bed’ was not always a lake bed.

They appear to be the missing link in the evolution of modern day birds. In fact, this is ‘the one’, even though it is sandwiched in the middle of three varying stages of the evolution of birds that are somewhere in a long chain of intermediate forms. ???

Some of them were in incredible shape. They clearly had feathers and webbed feet, but, uh, no head. In fact, none of the birds found had heads. Perhaps they were an evolutionary test batch? Five something’s evolved into headless flying things. Since they all died, nature, which cannot think, decided that the next ones should have heads. They resemble loons, without heads. Obviously, they didn’t have that haunting call that we hear at the cottage, or perhaps early man thought their heads were musical and decided to keep them.(Actually, if they came before loons, then loons would technically resemble Gansus and not the opposite.)

As well, these birds may not have been fully developed. Anyone who has watched birds nest is well aware that predatory species will kill off the young of other kinds. They often sever the head off. Many birds, such as the modern day hawk, decapitate their catch. I have witnessed the act myself.

Since the birds were in good shape, they obviously were not lunch. As they seem intact, other than the head, we must also entertain the notion that their carcasses were deposited where they were found. Not so with our researchers. They have already ascertained that these were water fowl.

Putting all of that into perspective, I am looking at my dog differently. Do you think that he may be the intermediate form between a horse and a guinea pig? He does look a bit like Donkey off of Shrek.

On a closing thought, I buried my last dog in my backyard. He is wrapped in a blanket which he was rather fond of. Someday, some young, aspiring evolutionary biologist is going to proclaim that he has found a dog-like creature that lived underground and could knit.

And you know what? The Journal Science will carry the article first.

Have a Great Weekend.