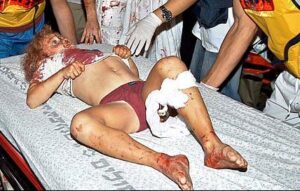 I keep coming upon story after story, comment after comment about the loss of innocent life in Lebanon. The press continually thrusts images of the dead in Lebanon onto our television screens and magazine covers and does it for only one purpose; to vilify Israel. I have to ask, why?

I can understand the desire to stop the killing of innocent men, women, and children. After all, who wants to see young children who resemble our very own wallowing in despair and confusion as they become victims or orphans? I would hope the answer to that would be nobody, but that simply isn’t the reality. The men who secretly orchestrate the actions and funding of the Middle East terror network thrive on suffering, especially the suffering of us infidels and our children.

I am asked by many why I am so gung-ho, for lack of a better word, about Israel going into Lebanon. I will clarify that not only do I think that it is a good thing, I also hope they go all the way to Iran and my rationale is no different than those who very prominently oppose the Israeli campaign. As well, I must make it perfectly clear that I do not revel in the thought of war, but only in the thought of the victory over terror.

There are several human rights groups currently criticizing Israel for its handling of the current crisis. They claim that a disproportionate number of casualties have been civilian in nature. This is, of course, an alarming trend. The criticism of Israel though is also disproportionate.

Take the latest news coverage. You don’t have to look very far to see the infirm and dead in Lebanon. There are camera crews crawling all over Lebanon, apparently impervious to the falling missiles from Israel. Day after day, newscast after newscast, we are shown the horrific aftermath of terror. (We must consider for a moment that it is the wages of terrorism that we are witnessing.)

What is the purpose of continually covering the carnage that resides in Lebanon? Could it be to end the war and suffering, or could it have a deeper political meaning?

We are well aware that one of the foremost weaknesses of the political left is their inability to muster the fortitude to do what must be done or the ability to even see it clearly. Their use of the media to polarize us against any use of force, whether in our own defence or in the defence of our allies, has has an astounding success rate. The latest polls (not that we should read too much into them) show that support for the Conservative Party of Canada is waning because of their stance on Hezbollah and their support of Israel. Why is this happening? Simply because people are being convinced that Israel is acting in a barbaric manner.

The mainstream press is either unable or unwilling to see the root cause of all the violence and until it exposes Hezbollah and their like for what they are and convinces the sheepish masses of it, then people will not support the effort required to put a stop to them. The result of this inaction will be even further bloodshed and suffering.

So far we see that war kills innocents and that the latest campaign by Israel has resulted in numerous such deaths. That is fine, but where is the balance? Why has the media not covered the screams of children in Israel as Katyussha rockets and now even more sophisticated missiles slam into residential neighbourhoods in cities across the Jewish state? Why is there no concerted voice of condemnation on the part of the international media and human rights groups on my nightly newscast aimed at the Arab states who sanction these acts? Is a Jew worth less than a lowly peasant Arab? It would seem so, if one were to believe the news. In fact, the only one’s decrying the states of Iran and Syria are for the most part the bloggers and independent news sites not affiliated with the likes of the Associated Press.

The simple fact that seems to be lost on just about everybody is that the Israeli Defense Forces are not targetting civilians intentionally. The terrorists are. Using that information alone, should the world not be united at this moment against Lebanon and Hezbollah? Against Hamas and Syria? Should the world not be marching on Tehran this instant to demand the cessation of hostilities aimed at civilians?

This, of course, would fit right in with the current outcry that is heard for the dying children in Lebanon. For some sad, strange reason, those who oppose the current Israeli offensive cannot see that in the end it will result in less suffering and less dying for innocent civilians on both sides of the Israeli-Lebanon border.

As long as we continue to regress to the point of the status-quo as so many suggest, the next flare up and perhaps full-scale war is simply lying just below the surface waiting for the right series of events to erupt. This endless cycle will only end once Hezbollah and Iran are powerless to instigate hostilities on a constant basis. That is how we can help the little children all; Jew, Muslim, and Christian.