Dublin, the capital of Ireland, is one of Europe’s most youthful cities. About 50% of its population is younger than 25 years of age. It has a vibrant nightlife with many famous nightclubs and pubs. Live music is played on the streets, and many of the internationally successful musicians are from here, like U2, Boyzone, The Dubliners and The Boomtown Rats.

Many of the literary giants are from Dublin. Writers like Oscar Wilde, Jonathan Swift, and Bram Stoker, as also Nobel laureates like William Butler Yeats, George Bernard Shaw and Samuel Beckett, and many other distinguished writers, lived here. The biggest libraries and literary museums of Ireland are found here. No wonder then, that Dublin was named the UNESCO City of literature in July 2010.

Similar Posts That You May Also Like: 1. Things to Do in Austin, 2. Romantic Getaways for Valentine’s and 3. Top Jobs That Require Travel. 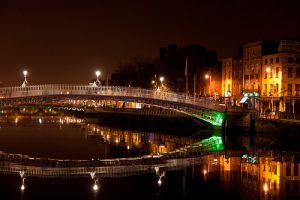 One of the first places to visit in Dublin is the Trinity College campus, the intellectual hub of Dublin. Trinity College is an oasis of peace and beauty with elegant gardens and classical and contemporary buildings.

Take in the excitement of Dublin, tour some of the best pubs, experience the social charm of Dublin and make friends from all over the world, with the pub crawl. Featuring live Irish music, a pint of Irish brewed beer, and pub grub, the pub crawl culminates in a late night pub.

Take a guided tour of the St Michan’s Church, where mummified remains of some of Dublin’s most influential families from the 17th to the 19th centuries, including the legendary Shears brothers can be found buried in 5 long burial vaults underneath the church.

The Science Gallery is a modern Innovative Gallery, taking a fresh, fun look at the applications of Science in various walks of life. Modern white hot scientific issues are thrashed out, and you can also get involved. Exhibitions change on a regular basis and there are events, debates, talks and workshops.

The Dublin Castle is a 13th century castle, founded in 1204, on the orders of King John of England. It was the seat of British rule in Ireland for 700 yrs, till 1992. Today grand, diplomatic state functions are held here.

If you are traveling to Dublin with your kids, you have to take them to Imaginosity, at Sandyford. It is a children’s museum, designed to trigger off the child’s imagination. A colorful, fun and lively place to be in, where the kids can act, draw, paint, climb, scramble, and even build in a “construction company”.

8. The National Gallery of Ireland

You will find a small but excellent collection of European artists work, from the 14th to the 20th centuries, including Monet, Picasso, Caravaggio, Degas and Goya. The National Gallery is located at Merrion Square West.

Enjoy the outdoors with Dublin’s numerous parks and gardens. The Phoenix (706 hectares) is one of the largest designed splendid parks in any European city. Over 30% is covered by oak, lime, beach, ash, sycamore and horse chestnut trees, and it is a sanctuary for many mammals and birds. The Dublin Zoo is in this park.

Experience the wonder of Ireland, by taking one of the lively and informative themed guided walking tours. Discover the cobbled alleys, the Viking remains, Georgian squares, explore both new and historic landmarks with friendly guides.

Croke Park is the headquarters of the Gaelic Athletic Association, which is the biggest sporting organization in Ireland. It is the fourth largest stadium in Europe, where all the finals of the football matches in Ireland, are held. It can seat 85,000 people.

The Book of Kells, is a world famous manuscript produced by the Celtic monks, in AD 800, containing the Latin texts of the Four Gospels. This is kept on display in the old library at Trinity College, and is one of the most beautifully illuminated manuscripts in the world. Two of the four volumes are on public display, one opened to show a major decorated page, and one to show two pages of script. The volumes are changed at regular intervals.

13. The National Museum of Ireland

The National Museum of Ireland has a noteworthy collection of decorative arts and has innumerable displays, frequently supplemented by workshops and talks. The Earth Science Museum contains fossils and even the odd chunk of a dinosaur.

14. The National Library of Ireland

The National Library of Ireland in Dublin has over 8 million items in its collection, from music, manuscripts, periodicals, photographs and maps. It is the most comprehensive compilation of materials representing Irish heritage.

This is a fun place full of enthralling Irish folklore, mythology and delightful stories. Allows you to delve deep into Irish and Celtic culture, to discover what lies behind the Irish cultural icons of Leprechauns, rainbows and pots of gold.