It’s difficult to be with someone who is shy especially if you like him or if you are contemplating on dating him. Not only can it be awkward around him but the sudden silences can be a little boring as well. Then comes the question of continuing conversation but what you have to understand is that he is shy, not dumb. It might be difficult to get a shy person out of the shell but it’s not impossible. If you try hard enough and give him some time, he will open up to you sooner or later. Now, the question is, can you wait for that long? Do you have the necessary patience? Here are a few ways to bring a shy guy out of his shell:

Similar posts that you may also like: 1. Jobs for Shy People, 2. How To Overcome Shyness Easily, 3. Become More Confident and 4. Ways to motivate yourself. 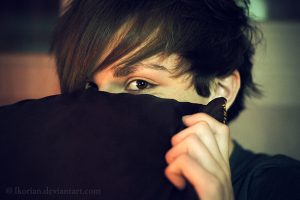 The most important thing to keep in mind when trying to get a shy guy to open up is to make him feel comfortable in your presence. Unless he feels at ease around you, he will not even contemplate opening up to you. Let him know that he can be himself in your presence without having to worry about his impression on you.

2. Give him some time

When you want this guy to come out of his shell, you will have to give him some time. You cannot expect him to open up as soon as you try to make him feel comfortable. It is going to take constant efforts and you will have to accept that. Let him unfurl himself at his own pace.

3. Be friendly but not over friendly

Learn to distinguish between being friendly and being over friendly. Don’t try to impose yourself or your friendship on him. Just because he is shy doesn’t mean that he would want to be friends with you. Let him make his own decision and giving him his space is one of the most important things that will affect his decision.

4. Try to find some common interests and talk about them

We all have something in common with each other so find something that interests the two of you and try to make him talk about it. Ask open ended questions so that he answers in sentences instead of monosyllables.

Once he starts opening up a little bit, encourage him to talk. Ask him to share stories and experiences. He might find it a little difficult initially but once he gets used to the attention, he might even start enjoying it.

6. Listen attentively when he talks

To make someone believe that you are a good friend and to help him to come out of his shell, you will first have to become a good listener. When he talks, don’t cut him short. Listen to what he says with attention and interest.

7. Introduce him to your friends

A great way to get someone to open up would be to introduce him to your friends. The more people he gets introduced to, the more conversation he will have to make. He might not feel very comfortable with it initially but once he gets into the habit of interacting with people, even if it’s on a superficial level, he will find it easier to come out of his shell.

8. Meet at a place he likes

If you are trying to help him to get rid of his shyness, you will have to be a part of his comfort zone. This is easier said than done. To make him feel at ease around you, meet him at places he finds comfortable. Before he comes out of his shell, he needs to have faith in you and trust you enough to know that you will be there so first, let him know that you feel comfortable in his world.

9. Ask him to make decisions

Since he’s a shy guy, allowing him to make some decisions is going to help him to shed the shyness and become open up. Encourage him to make decisions for himself.

It is very important to be patient around people who are shy. His inhibitions might have made him very timid and you will have to be patient and persistent in your efforts to help him overcome that.

11. Try to empathize with him

Empathy always works. When you are constantly making efforts to help someone to overcome his shyness, it is but natural to feel impatient. However, when you try empathize with that person and think about everything from his point of view, you will find it easier to cope up with everything. For someone who has always been shy, opening up and entering the world required a lot of courage so empathizing with him will make it easier for you to think of ways to help him.

12. Say things to build his confidence and self esteem

Since the guy is shy, you will have to encourage him and help him build his self confidence. Always be positive around him. Use positive words of encouragement and smile whenever you are around him.

Since you are an extrovert and he is shy, it is natural for you to appear as a fun loving and interesting person. However, don’t let your merits shadow his. If someone talks about your merits, you can talk about his.

14. Do things to make him happy

Small things can distribute a lot of happiness. Make a list of things he likes or enjoys and do them for him. Let him know that he can trust you with all his heart. He needs to know that you care about him before he opens up to you.